The Political Novel in Tunisia by Hedi Ghabri. Reviewed by Ahmed Mammou. 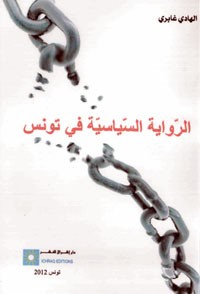 The Political Novel in Tunisia is a synthetic approach to one of the most important subjects of novels written in Arabic in Tunisia. It is written by Hedi Ghabri, and published by Ichraq-Editions (Tunisia, 2012) in 260 pages.

After the introduction in which the writer justifies his choice of the fictional examples that he used in his study, he divides his analytic approach into three chapters, and a conclusion. At the end of each chapter, he lists references based on the studied text, and the studies that  were written about it which were published in newspapers or specialised periodicals.

The writer states the reasons behind the choice of a fictional corpus limited to Abderrahman Abid’s Autumn Storms, Mohamed El Hedi Ben Saleh’s The Luster of Repentance, Hayet Ben Chiekh’s It Was the Wedding of Defeat, Mahmoud Tarchouna’s Life, and Radwan Al-Kouni’s The Path Cape. These novels’ distinctive feature is the tackling of “the political, sexual, and religious taboo.” These novels reflect “a vision of a generation that was burnt with the fire of the prohibitive taboos. Wherever it goes, there are prohibition, curbs, taboos, and red lines outlining the freedom of thought, and its fields. These novels were the production of the artistic moulding of the material of the gap between freedom, and coercion.” He sees in them “an attempt to understand the political fictional realm in Tunisia during the eighties, and nineties of the twentieth century which was a period in which Tunisia witnessed agitated political, (and social) transformations.”

The writer sees that these novelists have different political opinions reflected in their writings in the form of an expression of refusal that is troubled at one time, and quiet at another. It also sometimes seems a peaceful protest revealing some aspects of the status quo. It is at the end a diagnosis of the corruption of the political authority, and a denouncement of the suppressive forces, and the restriction of individual and public freedoms through showing the political two-sided discourse, and the attitudes of the different social samples towards it.

The writer devotes the second chapter of this study to the fictional imaginariness and sex, focusing on the political employment of sex within some of the studied novels, and on the artistic function of sex in some of the other novels through language and characters’ attitudes. The first chapter from which the writer drew benefits to shape the social attitudes, and the transformations witnessed by the country since the independence was to the point. However, the second chapter remained without a precise objective in showing the role of sex scenes in revealing the social factors, and in understanding the continuation of their employment within the fictional writing.

The third chapter of the study is devoted to the fictional imaginariness, and secularism in its  dimensions that the writer sees them in the attitude of the novelist that criticises or rejects the superstitious heritage, and the religious practices that are affected by popular beliefs.

In the conclusion of his study the writer assumes that the political novel reveals important secrets of the Tunisian society, even though those attitudes are coupled with taboo, prohibition, and censorship. This required the writers of those novels artistic skills to uncover what was hidden, and to divulge it without provoking the political, and religious authority. This can be understood as a reaction against the marginalisation of the creator, and the blockade of the free, and daring word. The novel in Tunisia benefited from the modern narratorial techniques, and expressed the society’s problems. Besides, it was able to convey the aspirations of the people of this land.

This analytic study of selected examples of Tunisian novels that were published in the eighties, and nineties of the twentieth century emphasises the deep-rootedness of Tunisian literature in its social, and civilisational environment, and its openness to the modern narratorial techniques. Although this study relies on a descriptive and analytic approach, it does not venture too much upon inferences and justifications. At the end, this study remained a serious approach to have access to one of the trends of the Tunisian novel, and to show its evolution during a period in which the country’s policy was based on the marginalisation of the voice that was against the authority.

You can read the original text in Arabic here.

Written by Ahmed Mammou , and translated from Arabic by Ali Znaidi

1 Response to The Political Novel in Tunisia by Hedi Ghabri. Reviewed by Ahmed Mammou.